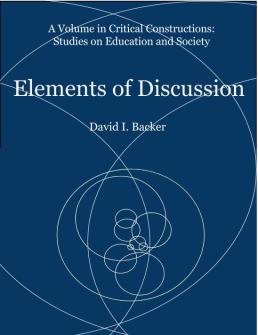 “This small book of practice is a collection of received wisdom.” Such is how David I. Backer introduces his book, Elements of Discussion, in a succinct preface that proves essential to understanding this uncommon, not to say unusual, collection of 67 short reflections highlighting a range of concerns that may arise in the preparation, execution, and reflection of discussion. Elements of Discussion is indeed different than a traditional handbook about discussion. Its form is poetic—some sections extend over just a couple of paragraphs and at other times, no longer than a sentence, leaving the remainder and back of the page blank. At the same time, its content is political and philosophical, drawing from various works highlighted in the Reading List, including Gabriel Tarde, Sigmund Freud, Wilhelm Reich, Valentin Voloshinov, Michel Foucault, Paul Grice, Jürgen Habermas, Peter Sloterdijk, and Paulo Freire, just to name a few. If at first glance the book invites a degree of skepticism with its less than obvious practicality, a more careful reading reveals a heartfelt mission to encourage current and potential discussion facilitators to reflect and act in ways that create equalizing spaces for honest, albeit at times unconventional, discussions supporting democracy, equality, and social justice.

Backer begins his book with material and spatial considerations, speaking about the organization of the table and chairs, how to address the discussants as they enter the room, and how to begin the discussion. Advancing through the book, Backer emphasizes the complex nature of discussion. In contrast to what some call discussion, meaning an instance resembling a recitation or lecture, Backer argues that a true discussion can redistribute power. He addresses physical concerns of the participants, including the facilitator, reminding the reader to respect the humanity of the individual. The book describes the complex interplay between questioning, “living silences,” and eye contact, bringing to the reader’s attention the philosophical and practical importance of establishing a “roleless” state of equal recognition between participants.

As the discussion continues, the book describes various perspectives regarding democracy and the redistribution of power to participants. The book presents concrete ideas to handle issues such as quiet participants by inviting others to speak, responding to inquiries, and especially establishing the facilitator as a joint participant. It also describes elements of politeness: allowing others to speak first, using participants’ proper names, and encouraging participants to speak. After a comment on food breaks, the author sums up important elements discussed in the first half of the book. Concrete ideas are given to encourage participation through various activities and games. These ideas are quickly described, giving way to more transcendent ideas of what discussion is and is not. Backer reassures facilitators that tensions may rise, participants may lose sight of the goal of the discussion, or comments may digress. The reader understands that these are normal occurrences that may be skillfully and considerately mediated by the facilitator. The book concludes with a brief recap about discussion and exhorts the reader to encourage the facilitator to partake in a brief meta-discussion with the participants at the close of the gathering. As Backer states in the Preface, a concise reading list at the end of the work provides a glimpse of where the author drew his inspiration for many of the ideas expressed in the book. It is also a list of resources for exploring discussion from philosophical, sociological, psychological, and educational points of view.

Elements of Discussion is a surprising combination of philosophy and form. Backer’s collection of thoughts can be related to heuristic tools such as Brian Eno’s Oblique Strategies. Like drawing from a stack of cards, the reader has the freedom to pick and choose which topic to read, to reflect on, to rationalize, and, perhaps, to apply. However, this freedom is unfortunately overshadowed by the lack of guidance that practitioners may be searching for and hope to find after reading. Given that Backer gains his inspiration from Strunk and White’s Elements of Style and Harvey Penick’s Little Red Book, it may be appropriate to add an additional caveat for readers so that they have a better idea of how one should approach such a book. It is for this reason as well that it is not altogether clear which audience—general, specialized, or academic—would benefit the most from this book.

Nonetheless, the book’s tone is both light-hearted and profound. Almost childlike discussion activities are juxtaposed with purposeful, ideological stances against historically hypocritical and discriminatory dynamics in discussion. English language, a liberating and equalizing yet also historically oppressive force, remains one example of the inherent contradictions that Backer describes and reflects on in his book, without assuming a definitive answer. There is a sincerity in Backer’s language that reveals legitimate considerations about the ways power and authority are inherently embodied in the idea of the facilitator.

Backer encourages the reader to embrace the humanity of everyone through a recognition of each person’s feelings, past experiences, and potential to contribute. With every pragmatic consideration lies a bit of wisdom exhorting the reader or future discussion facilitator to reflect on discussion as a means of establishing relationships grounded in equality, mutual respect, and honesty. Even though Backer’s reflections address occasionally banal elements such as the organization of the table and chairs and how to begin a group discussion, the blank pages that follow these ideas spur a thoughtful reader to continue their analysis of discussion beyond the book in order to become a more thoughtful and reflective facilitator-participant.