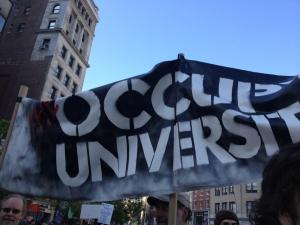 I worked with this group from Sept. 2011 until somewhat recently when the Horizontal Pedagogy working group met informally to document its work between 2011-2013.

The NYC General Assembly website no longer has much of the information it once did, so I’m devoting this page to some OccU stuff that’s still out there. The website designed for OccU’s People’s Reconstruction Series is still in existence, for instance. Many of the Horizontal Pedagogy videos made at May Day 2012 are also still online. Ben Katchor’s New York Comics & Picture-story Symposium still exists, in fact. There is also this music video made by OccU activists advertising OccU’s Debt Series.

Below is a small image archive of OccU activities, which are also available at its Facebook page.

A founding member of OccU stands with a board of notes during the “Debt and Desire” encounter of OccU’s Debt Series, Oct. 2012.

A scene from Poetry and Political Feeling.

A board of notes from Horizontal Pedagogy’s 2012 meeting at the Free University.

Another flier announcing the opening of OccU.